Welcome to the homepage of the Embassy of Hungary in New Delhi. 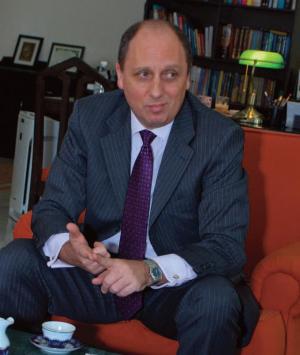 Hungary is a small country in the middle of Europe with hardly 10 million people. Hungary at the same time is a great country with unmatched cultural, scientific and historic heritage, coupled with untarnished natural beauty and welcoming, hardworking people. It is an ideal hub for business, a popular and safe tourist destination.

Did you know... that the developers of nuclear engineering; the holograph; the Moon and Mars rovers; the Model T Ford; ballpoint pen; telephone switchboard; BASIC computer programming; isolation of vitamin C; Rubik cube; dynamo, safety matches; helicopter, soda water, colour television; the carburettor and the automatic gearbox; the Zeppelin…. are all of Hungarian origin? And so is – among others - Joseph Pulitzer, of "Pulitzer Prize"; the ex-New York governor George Pataki; the legendary film producer Sir Alexander Korda; film director George Cukor; fashion designer Calvin Klein, actor Tony Curtis. The greatest football player in history Ferenc Puskás was also Hungarian. Would you believe the small Hungary ranks 8th in the world in Olympic Medals?

The most important task for me, as the Ambassador, and for my colleagues at the embassy is to effectively promote Hungary’s greatness and at the same time represent Hungary's interests - be it political, economic or cultural – in India and to strengthen the ties between our countries. Our job is easy, because we have good base to start from. India and Hungary has had a long history of cooperation, beginning in earnest at the end of the eighteen hundreds, intensifying during India’s non-aligned days, waning in the 1990s, but growing stronger again in the 21st century.

The whole staff of the Embassy of Hungary – our Hungarian colleagues as well as our Indian colleagues – are working to make your interaction with our embassy easier, we are here to help you if you have inquires on business, tourism, culture, education and yes, also visa affairs related to Hungary. I hope you will find the information of our website useful and interesting.

Please note that our embassy in New Delhi represents Hungary also in Bangladesh, the Maldives, Nepal and Sri Lanka.

Greetings by the Ambassador

In several respects, Europe finds itself at a crossroads. Fundamental decisions have to be made which will determine the fate of the continent. Some of the major challenges Europe is facing today have a bearing on the Christian identity of the continent. This thousand-year old identity could provide inspiration for finding the appropriate answers to these challenges. This puts a particular responsibility on the shoulders of Christian-affiliated media and more generally of journalists who are guided by the teachings of the Church in their everyday work. Bringing together eminent persons dealing with contemporary issues of Christian civilization and the Christian segment of the press for an intensive exchange of views would give an impetus to the reflection process already going on in Europe and form the current political discourse.

Organized by the TEMPUS Public Foundation, representatives of nine leading Hungarian universities and the Hungarian Rectors' Conference visited various cities in India at the beginning of April 2018. One of the goals of the delegation was to participate in the international higher education fair organized by FPPEDU Media and to visit leading higher education institutions through professional programs.

The Global Development Network (GDN) held its 18th annual conference with over 200 participants in New Delhi on 22-23 March 2018.